The Centurion forms one of the most interesting shipwreck dives in Sydney Harbour. She was wrecked on 16 January 1887. The vessel, owned by George Thompson was departing Sydney under tow for Honolulu when it got into difficulties at the Heads. Another steamer was moored in the channel, and in the attempt to pass around it, Centurion bumped against the rocks at The Old Mans Hat on North Head. Recovering from the shore, Centurion drifted back into the harbour and sank in 18 meters of water. Today the remains include a substantial portion of the hull (buried), deck frames, sections of the masts, anchor chain and other fastenings. Lithograph showing the Centurion aground at Old Man's Hat. The Centurion was built as a magnificent timber clipper ship, later transformed to a barque rig, square-rigged on two masts. With a length of 63 meters and tonnage of 1004 tons gross, the vessel had been built in Aberdeen, Scotland, in 1869 for the Aberdeen White Star Line. Centurion was built in the famous Aberdeen shipyard of Walter Hood & Sons, that also built the Fame, Queen of Nations and Walter Hood, all wrecked in NSW. Towards the end of its life, the passenger and cargo carrier served as a collier. "Admiralty" style anchor from "Centurion" site at NSW Water Police. Photographer: David Nutley Information obtained from www.maritimeheritage.nsw.gov.au.

Fairy Bower gets its name from the miniature fairy penguins that can be found here. This shore dive lies just off of the ocean-side pathway running between Manly Beach and Shelley Beach. It is located about halfway between the two and swimmers and divers can get down to the water via a metal staircase. This is a great site for night dives when there is not much traffic on the pathway.

When you get into the water swim north away from the beach. There are some large rocks that you can swim between and there is also a swim-through, though you may need a guide to find it. As you swim north you will get down to approximately 8 metres of water maximum. There is a prominent reef that you can follow that extends out fairly far. In the western side of a reef is a large section of a storm pipe which baby wobbegongs and other fish like to hide in. There is also a gully between the rocks to the west that divers can swim through.

This is a good dive for seeing sharks. In March the dusky whaler sharks flock to this location. Some of PRO DIVE's guides have reported seeing almost twenty at a single time. Port Jacksons also can be found here in the winter. Aside from the sharks there are also blue gropers, schools of surgeonfish, yellowtail, leatherjackets, seapike, fiddler rays, sting and numb rays, and giant cuttlefish.

Enter from the shore along the right hand side of the beach (facing the sea). Keep the rock wall on your right as you head out and on your left as you head back - an easy dive site to navigate. As with any site, Shelley Beach is weather dependant - generally protected during easterly winds, which makes it diveable when a lot of other sites in the area are blown out. Viz can vary from 3 to 15M but is usually clearer during the winter months. On a good day, this is a spectacular site!
Shelly Beach

The best of the site is further out than most people get to and you do need reasonable air consumption to reach it. Swim out following the rock wall to your right, until it turns northwards and starts to peter out. Take a heading and keep going following the remnants of the rock wall on the sea floor and you should come to a kelp bed. Weedy seadragons are frequently found here and the depth should not exceed 12m.

Along the wall and amongst the big boulders, other marine life seen regularly is the divine eastern blue gropers (wrasse), schools of yellowtail and big eyes, mados and often pike. Red Morwongs, goatfish in the sandy area, flatheads and often ludericks and old wives. Under ledges shrimps galore and often juvenile lionfish. Port Jackson sharks and giant cuttlefish are common in season and wobbegongs sleep in crevices and under the big boulders. 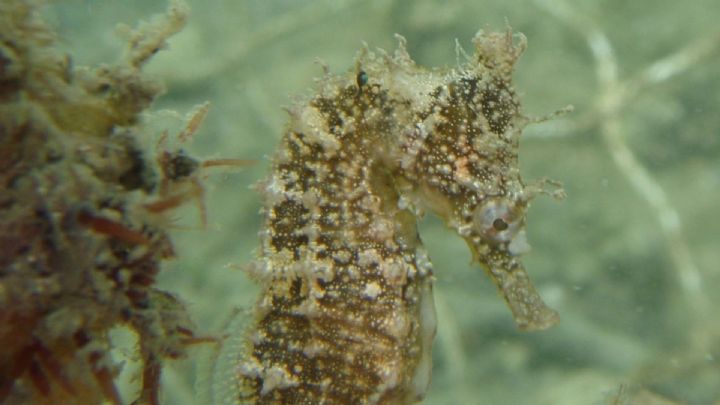 If you dislike seahorses then the Manly Nets Shore Dive is NOT for you. However, because these are generally easy creatures to get along with this is a stunning dive. The nets lie in about 2 metres of water so anyone diving here can swim around for over an hour. There is a multitude of seahorses that are gathered along the nets and they are fascinating to watch. When you first enter the water you may not see these creatures but this is because they are so small. Swim slowly over to the nets and as your eyes adjust you will become aware of the seahorses all around you. This is a fun and easy dive and a must do for anyone who likes unique aquatic animals.

Avoid the hassel of parking at Bondi and access this dive site from Sealife V. Located at the northern end of Bondi you will descent along the anchor line to approx 15 meters where a large reef is located. You can explore overhangs, caves and if you are feeling adventourous swim-throughs. Wobbegongs, giant cuttlefish, green morays, ladder-finned pomfrets, bullseyes, yellowtail, red morwong, one spot puller, old wives, blue gropers, nannygai, crayfish, morrish idols, rays, and maori and king wrasses all can be found here routinely. Nudibranch enthusiasts will also be pleased to know that many different species are around as well.

Is one of a series of sites we can dive under the sheer cliffs (south of Sydney Heads) from the Macquairie Lighthouse to the the Gap.
The underwater seascape is strewn with boulders  covered in sponges, bryzoa, the aptly named sea tulips (type of tunicat), sea ferns as well as nudibranchs and other invertebrates.  Divers are greeted by the ever present Blue Wrasse and fish life typical in this area.  A nice easy dive with lots to see including moray eels and bottom dwelling sharks including Wobegongs and at different times of hear the Port Jackson Sharks.

Located on Sydney's northern beaches at longreef, the apartments is a spectacular dive site renowned for its schooling fish, swim throughs and celebrity appearances of grey nurse sharks. With a maximum depth of 24m, a minimum depth of 10m and the reef being approx 200m long, with the main wildlife being in 10m-18m making it an exciting dive for openwater divers as well as the experienced. Consisting of big boulders and rounded rock formations making excellent homes for cuttlefish and port jackson sharks. Although there can be a strong southerly current this usually dissipates after 10m.

Wreck of the Centurion

Wreck of the Centurion